See this guide for previous versions

The Unity SDK provides compatibilty and smooth integration of Maestro with new and existing XR scenes.

This Unity SDK is designed to be tracking-agnostic, though we provide prefab rigs for Ultraleap and Meta Quest 1/2 hand tracking. If you want compatibility with some other tracking configuration, you can try to roll your own rig by following these steps [TODO].

The Unity SDK provides the following prefab rigs for ease of integration:

It is also possible to roll your own configuration using the SDK components available.

Before installing the Unity SDK package, you’ll need to add a scoped registry entry for Ultraleap’s Unity SDK so that the Package Manager can resolve the dependency. You can do this by following the steps listed here: https://developer.leapmotion.com/unity#setup-openupm.

You can grab a tarball of our latest Unity SDK Package here [TODO]. You can add this package using the Package Manager: 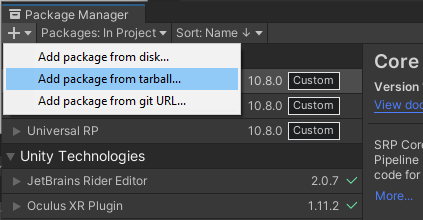 Once you’ve installed the package, you can navigate to the “Samples” section within the Package Manager listing to import the Sandbox sample scene: 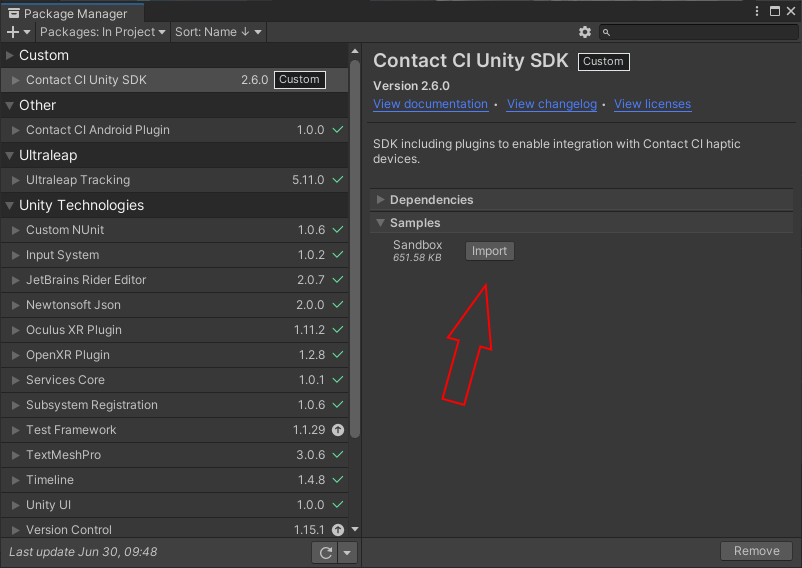 The sandbox scene has a variety of interactions including picking up objects, pushing buttons, and finger painting.

The easiest way to add Maestro compatibility to a Unity scene is by utilizing the provided prefabs: [MaestroUltraleapRig] and [MaestroOculusRig]. These can be found under Contact CI Unity SDK/Runtime/Core/Prefabs/ in the Packages folder after installing from a tarball. Simply drag the appropriate prefab into the hierarchy.

By default, any object that is collidable within the scene will provides haptics when touched. The default haptics can be configured via MaestroManager. MaestroManager can be found on the root of the provided prefabs. 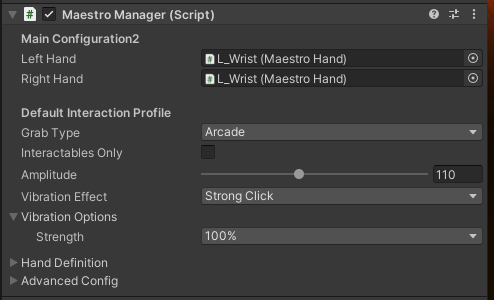 Under Default Interaction Profile, you can configure the default haptics and configuration for the scene:

To customize the haptics for a given collidable gameobject, utilize the MaestroInteractable script. The fields available will look very similar to those found on MaestroManager (documented here). 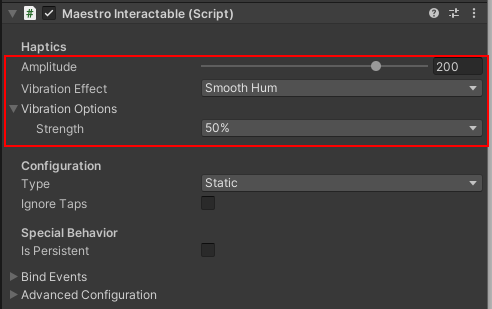 You can also control how an object can be manipulated using the Type field under Configuration:

This script also defines a few events that may be used to easily create complex interactions:

It should be noted that the DLLs used by our SDK are 64-bit only. As such, if the Unity platform settings are set to Any CPU or x86 execution will halt.

To address this, you may find all DLLs under Contact CI Unity SDK/Runtime/Core/_DLLs. Set each DLL’s CPU setting to x86_64. If you are performing builds, this will also have to be done so the DLLs are included with 64-bit builds, and excluded for 32-bit builds.

You may also have to enable Load on startup under Plugin load settings. The Unity editor will have to be restarted for this to take effect.

My Quest .apk doesn’t have hand tracking! Starting the app gives a “Switch to Controllers” prompt.

In the headset itself, be sure you have hand tracking enabled in your settings, under Hands and Controllers.

In Unity, make sure your Oculus project settings don’t have Hand Tracking Support set to Controllers Only. Setting it to Hands Only is recommended. These settings can be found on the main OVRManager component in the scene or under Assets/Oculus/OculusProjectConfig.asset.

You need to add the scoped registry for Ultraleap hand tracking support, see Setup above.

error CS0246: The type or namespace name ‘OVRManager’ could not be found (are you missing a using directive or an assembly reference?)

You need to import the Oculus Integration for full Quest hand tracking support.